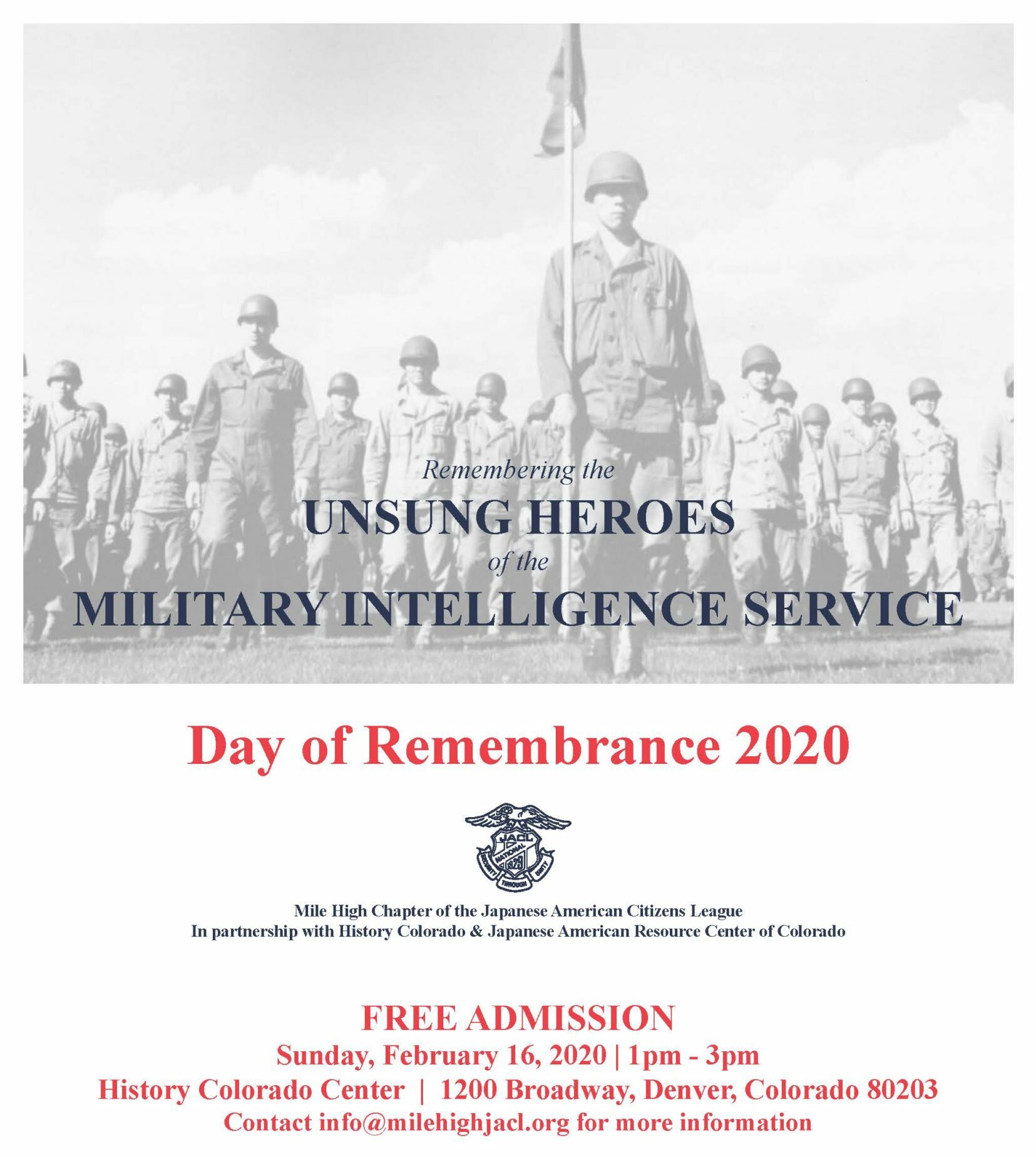 The Day of Remembrance commemorates the signing of Executive Order 9066 on February 19, 1942, that allowed the incarceration of 120,000 persons of Japanese ancestry during WWII. This year’s program at the History Colorado Center is hosted by the Mile High Chapter of the Japanese American Citizens League and Japanese American Resource Center of Colorado and remembers the unsung heroes of the Military Intelligence Service. The event will be held from 1-3 pm and features keynote speaker Mitch Maki, CEO of the Go For Broke National Education Center in Los Angeles. For more information, view the event flyer

The Amache Pilgrimage is held each year on the Saturday before Memorial Day Weekend, which will be May 16 in 2020. It is a day to remember those of Japanese descent who spent more than three years imprisoned on the plains of southern Colorado during World War II. 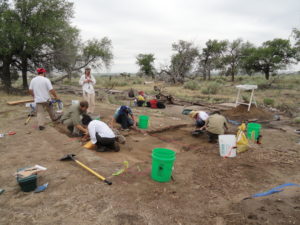 DU’s Amache Project will offer its biennial Field School from June 14-July 18. The field school is a four-credit undergraduate level course for students interested in archaeology, museum studies, or history. High school interns and volunteers with family ties to the site are also welcome. A community open house will be held on Friday, July 10, and public open house on Saturday, July 11. For course details, visit the Institute for Field Research.

A hailstorm on July 29 delivered baseball-sized hail driven by 70 mph winds, resulting in damage at the Amache site, research center, and other buildings/structures in Granada. The barracks building on the Amache site lost 65 of its small-pane windows, there was also damage to the water tower and guard tower. The research center also lost many windows, needed to be re-roofed, and needs new fencing. Amache Preservation Society was able to secure the buildings, protect all artifacts, and perform crucial repairs. Thanks to the outpouring of support from the Amache community, immediate costs were covered, but larger repairs are still ongoing. Members of APS are also volunteering their time and assistance to Granada community members whose homes, vehicles, and other property sustained major damage.

We would be grateful for any funds to help with continued restoration.
You can send tax-deductible donations directly to the Amache Preservation Society or through our PayPal Donate button. 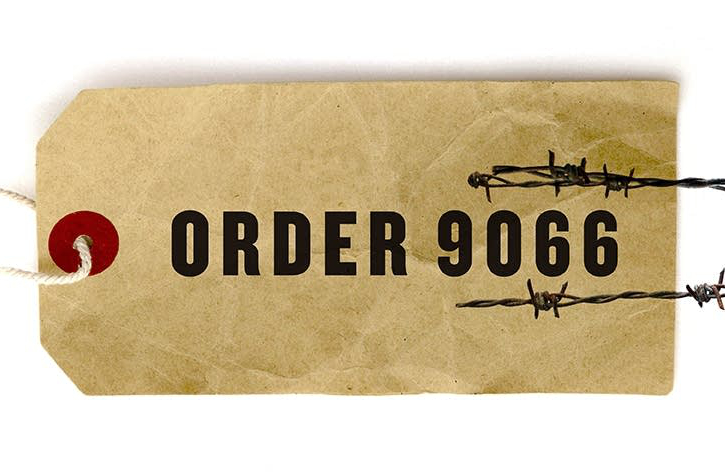 APM reports and the Smithsonian’s National Museum of American History recently released Order 9066, a podcast series chronicling the history of the Japanese-American incarceration through vivid, first-person accounts. It is narrated by Sab Shimono and Pat Suzuki, veteran actors and stage performers incarcerated at Amache. 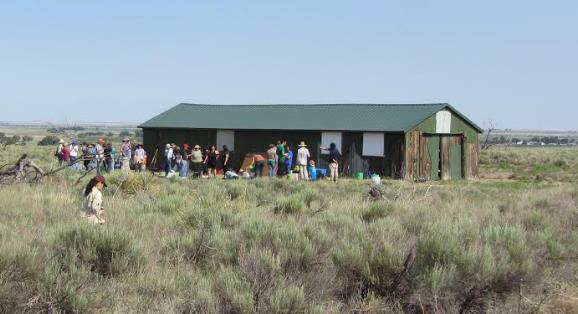 The 11-F Recreation Hall was moved back to its original Amache foundation from the town of Granada in time for the annual May Amache pilgrimage. Colorado Preservation Inc. (CPI) documented the process with a media crew to share the experience. Several local and international media outlets also publicized articles about moving the rec hall back to Amache. The area around the rec hall was one of the archaeological sites studied this year by the Denver University Field School. Aside from moving the rec hall, the larger project included the addition of fences around the water and guard towers, lighting the water tower, and adding a historic searchlight, comparable to the original, to the guard tower. 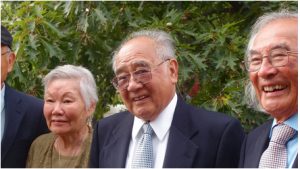 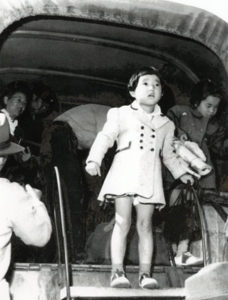 Sonoma State University’s North Bay Ethnic Digital Collection features photographs of daily life at the Amache Relocation Center in Colorado, home to over 7,000 interned Americans of Japanese ancestry during World War II, many of them from the North Bay. Sonoma State University Professor Emeritus Robert Fuchigami was an internee in the Amache Relocation Center and wrote the descriptions for many of the items in the Collection, which began as a grant-funded project and part of the University Library’s North Bay Ethnic Archive. The collection can be accessed online at https://northbaydigital.sonoma.edu/digital/collection/nbedc. 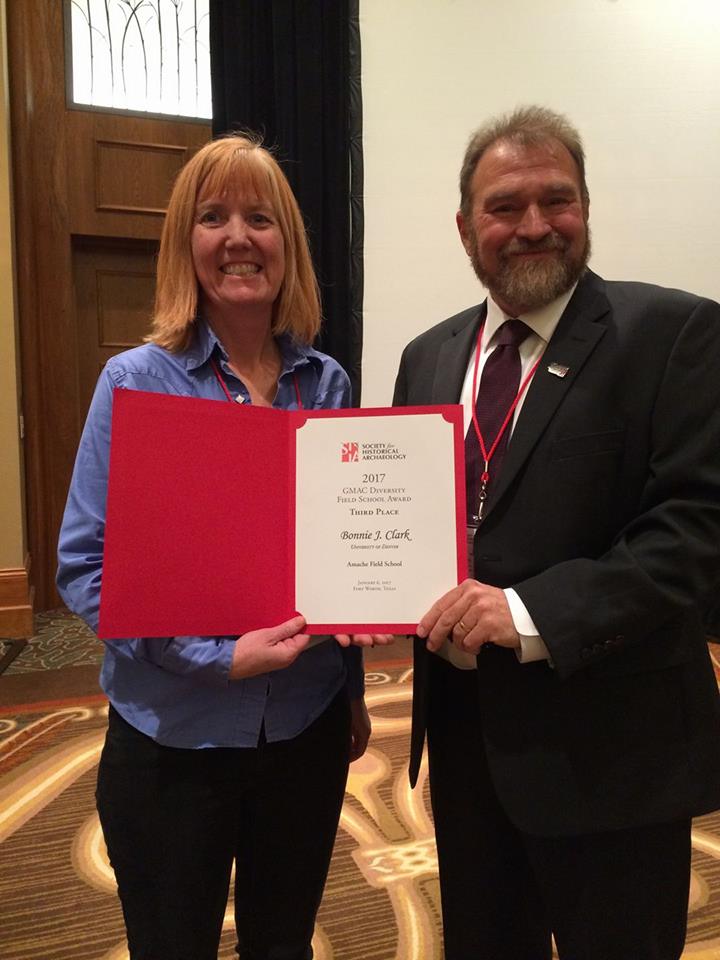 The DU Archaeology Field School was recognized for promoting diversity in the discipline at the Society for Historical Archaeology conference in January, 2017. The field school is typically offered every two years (in even years) and is a four-credit undergraduate level course for students interested in archaeology, museum studies, or history. High school internship and volunteer opportunities are available for those with family ties to the site. A Community Open House for those with personal or family connections to Amache and a Public Open House open to everyone are held each season. Congratulations, Dr. Bonnie Clark! 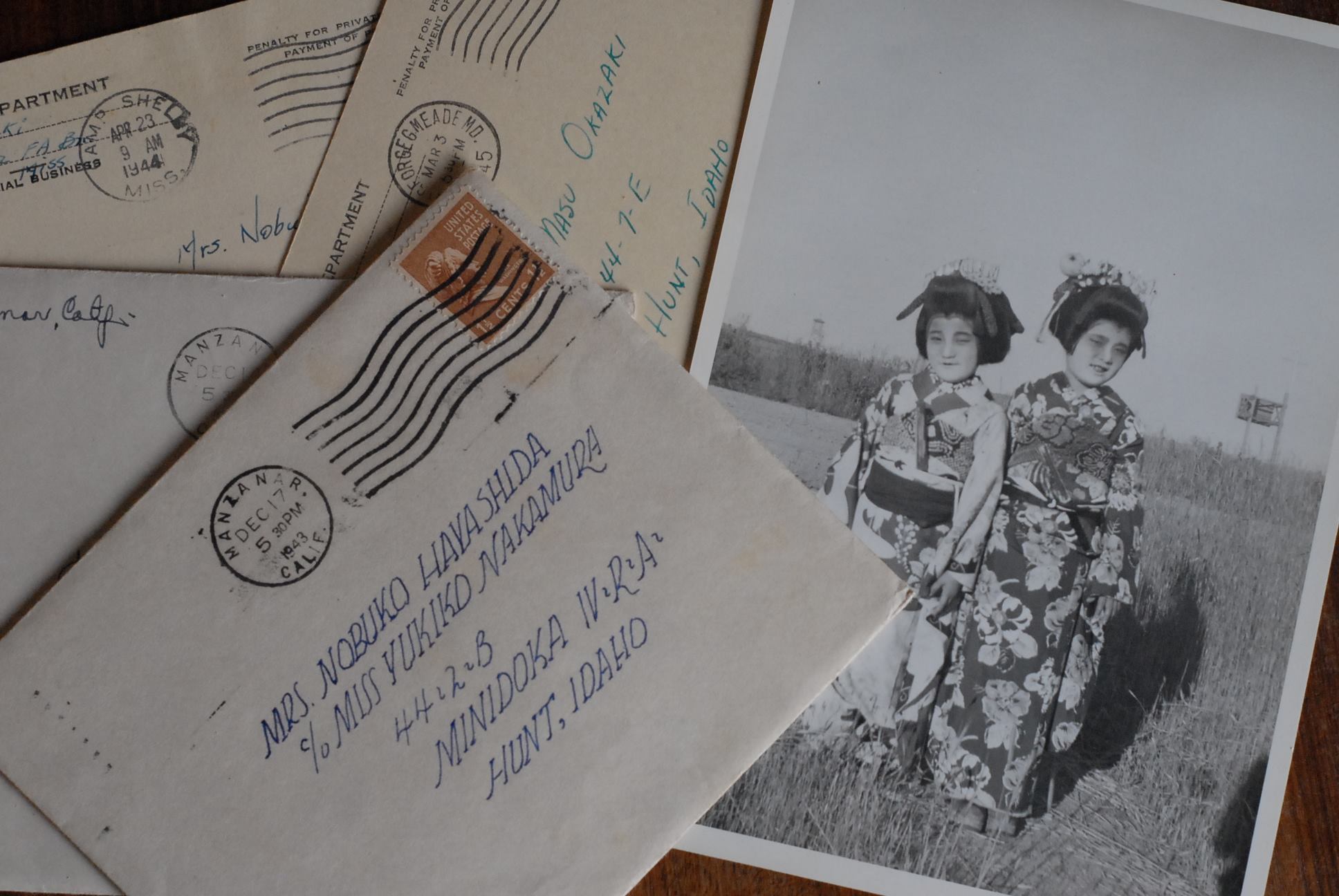 The Minidoka Ghost Stories project is seeking stories of ghosts, hauntings, and the strange from the imprisonment of Japanese Americans during World War II, and is an opportunity to hear and to share a unique aspect of the internment experience. These stories not only provide an alternative inroad to Japanese American history, but also, in the analysis of their telling, provide insights into our culture, our values, and our legacy. Though Minidoka is specified in the project’s title, they are interested in hearing stories associated with ANY of the camps. To learn more about the project or to contribute, visit the project’s facebook page or contact them at minidokaghoststories@gmail.com.

A student and community curated exhibit, Connecting the Pieces: Dialogues on the Amache Archaeology Collection is now available to travel. Connecting the Pieces features objects from the DU Amache Research Project that help tell the story of Japanese American internment during World War II. Interested in bringing the dialogue to your local museum, library, or community center? Download the flier or contact Anne Amati for more information.