In January 1943, the US War Department announced the formation of the segregated 442nd Regimental Combat Team (RCT) made up of Nisei volunteers from Hawaii and the continental U.S. There were 953 Amache men and women who served in the segregated Japanese American 442nd Regimental Combat Team, 100th Infantry Battalion, Military Intelligence Service (MIS), Women’s Army Corps, and Nurses Army Corps during WWII. This number was nearly ten percent of the people at Amache and the highest percentage of all the incarceration sites.

On July 5, 1944, a monument to honor the Amache men and women was erected in front of the Co-op building. Initially, the Honor roll carried the names of those called from the Lamar board no. 35. As soon as the names from other Selective Service boards were made available, they were added to the monument. The credit for the creation of the Honor Roll goes to the following: Yutaka Suzuki, high school wood shop, drafting office, carpenter shop and the construction crew. An iron flagpole with new paint was erected by the recreation department in front of the Amache Honor Roll in the Co-op plaza.

In August 1944, an illuminated sign showing the total number of Amacheans in the armed service was erected just inside the main entrance. The sign, was placed so that it could be seen at any hour of the day, has a blue star at the top, and initially worded as follows: “585 Japanese Americans in Service From Amache.” The numbers were in red and the words in blue. According to William Wroth, senior engineer, its panel was designed, and printed by Jiro Tani and Mike Wada of the Silk Screen Shop. The frame was made by C.B. Painter of the carpenter shop, while Lanning Flint of the electrical shop did the wiring.

“Blue Star” is still a term that refers to the family members of those on active duty in the US military. At Amache, the Blue Star Mothers often had a booth at the carnivals holding bake sales and sold Defense Stamps. The photo below shows the Blue Star mothers and wives with visiting soldiers. 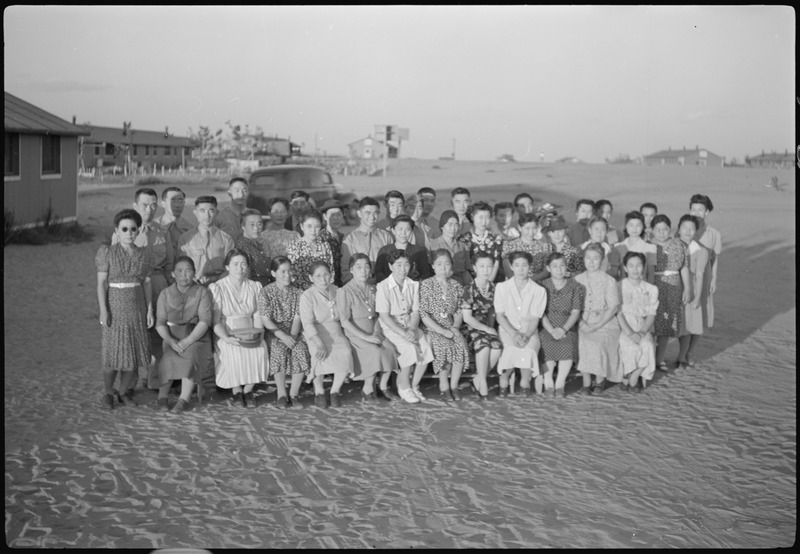 Thirty-two became language instructors in Army intelligence. The 442nd/100th is the most highly decorated unit for its size and length of service in the history of the U.S. Armed Forces, fighting in Italy, France and Germany, receiving eight Presidential Unit Citations, 21 Medals of Honor, 52 Distinguished Service Crosses 559 Silver Stars, 4,000 Bronze Stars, and 9,486 Purple Hearts.

In April 1945, the 552nd Field Artillery Battalion of the 442nd RCT helped to liberate part of the Dachau death camp. Japanese Americans in the MIS served as interpreters in the Pacific theater and later during the Occupation of Japan; many served in both the 442nd and MIS. In 2010, Congress awarded the Congressional Gold Medal, the nation’s highest civilian award, to the 100th/442nd/MIS. A bronze duplicate of the medal is on display at the Amache Museum in Granada, Colorado.

The Granada Pioneer newspaper published the Amache Honor Roll in its December 30, 1944 issue.