In 2007 the Friends of Amache (which consists of the Amache Historical Society, the Amache Club, the Amache Preservation Society, and the Town of Granada) collaborated with the National Park Service and other preservation partners to produce a Comprehensive Interpretive Plan and Conceptual Development Plan outlining the interpretive, educational and site goals for Amache. An essential element of the Plan includes returning buildings to the site, primarily barracks and other iconic structures. The Plan also described the need for a visitor center and additional educational and interpretive opportunities for site visitors.

Working in partnership with the Friends of Amache, the National Trust for Historic Preservation and Colorado Preservation, Inc. are undertaking several projects designed to further these goals.

What Became of the Buildings from Amache?

The vast majority of Amache’s original building stock was dispersed through sale by the War Assets Administration in 1947, leaving foundations and the street grid as the only physical reminders of the placement of buildings and vast expanse of the camp. Among the goals of the Comprehensive Plan is the creation of a more interactive, sensory visitor experience at Amache that can be provided through the physical presence of buildings at the site. The Friends of Amache and partners wish to develop a barrack block or cluster of buildings on-site that would potentially include a mess hall, barrack building(s), guard tower, water tower, and a portion of camp fencing. A Building Stock Survey was recently undertaken to determine what became of Amache’s buildings upon the camp’s closure. This project was undertaken by Colorado Preservation, Inc. and was supported by a grant from the National Park Service (Japanese American Confinement Sites Grant Program), and the Friends of Amache (which consists of Amache Historical Society, the Amache Club, the Amache Preservation Society, and the Town of Granada). The Building Stock Survey identified the locations of residential, administrative, institutional, and civic buildings within the southeastern region of Colorado (including Baca, Bent, Crowley, Kiowa, Otero, Las Animas, and Prowers counties) and immediate areas of the adjoining states of Kansas and Oklahoma. The survey’s results are informing future plans for the site development. Using archival research, the survey identified likely locations of building stock in the project area, which included the 110 mile radius of Amache. Once sites were identified, inventory forms of existing building stock were completed, including evaluation of the buildings’ physical and historic integrity. The report prioritized identified building stock for relocation to Amache, and assessed the feasibility thereof. The final report with recommendations on the future physical relocation of buildings, on-site stabilization, historic rehabilitation/restoration, interpretation, and potential related preservation funding sources can be read here.

Returning the Water Tower and a Guard Tower to Amache 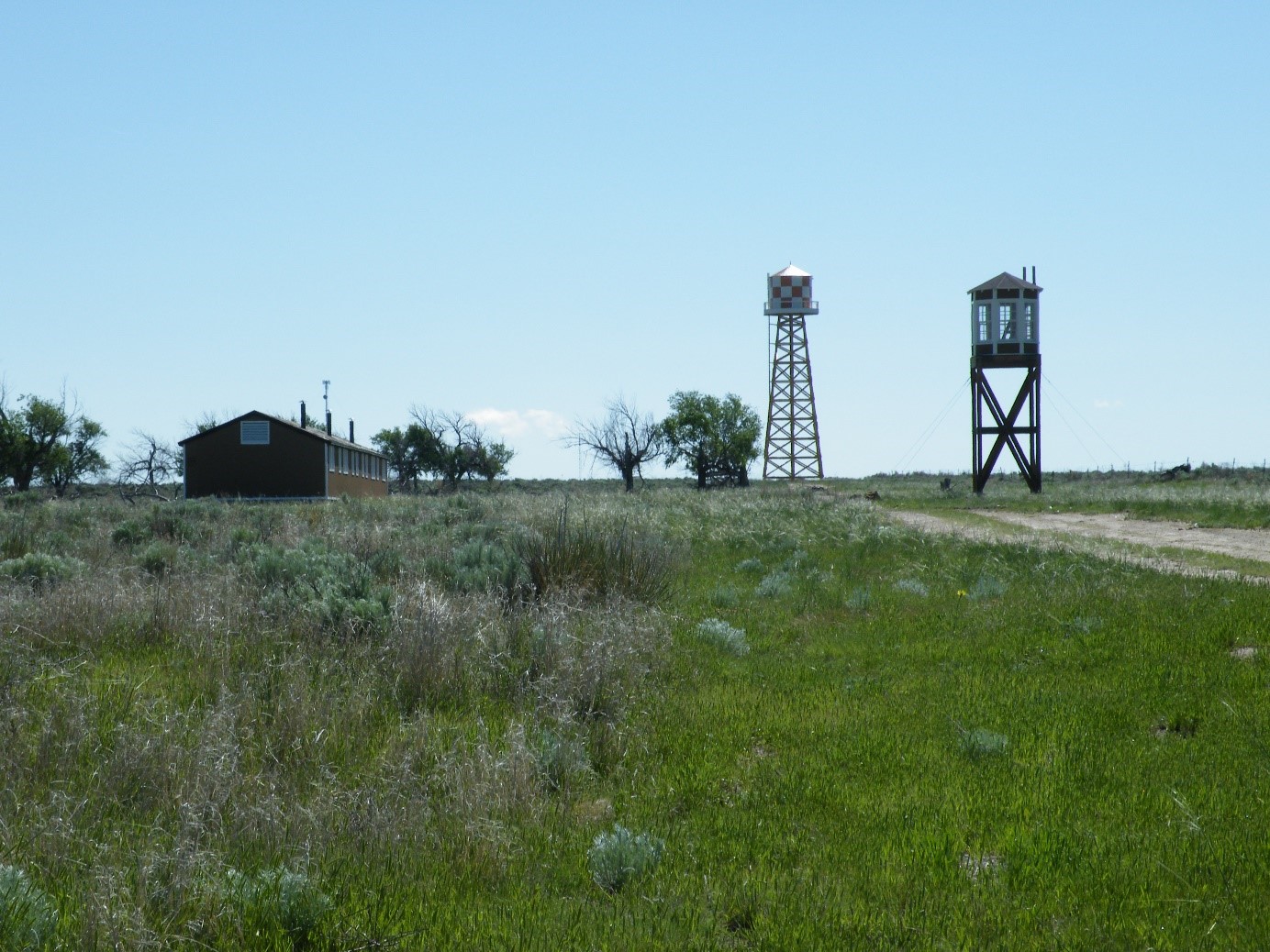 The Guard Tower and Water Tower have been restored to the Amache site as shown in the photo above. The Amache water tower, the tallest structure for miles, was a regional landmark on the vast landscape.

Telling the Story to Visitors

Funds from the National Park Service were used to develop and implement several different types of on-site interpretation, including an audio Podcast tour of Amache featuring voices of former internees, an enhanced website (you are visiting it today!) and additional interpretive panels that tell visitors about people, activities and buildings once present there.

The first stage of the Amache barrack project was finished in the fall of 2017, with the National Park Service signing off on the project. Original plans were to move a barrack from Stonington, CO that had been used for housing at a ranch. However, in the end, a barrack was reconstructed on site. Funding and support came from the National Park Service (Japanese American Confinement Sites Grant Program), the Colorado State Historical Fund, Colorado Preservation, Inc., the University of Denver and the University of Colorado-Denver. A generous cash match was provided by the Hilton Foundation in honor of the Kenneth Ozaki family. Colorado Preservation Inc. was the grant administrator for this project and has helped obtain many dollars for all our projects. Another grant from the Gates foundation will allow us to finish the inside of the barrack and add additional details, such as coal bins on the outside. The Amache Preservation Society is in the process of furnishing the move-in room of the barrack. This room will be left like it was in 1942 on the first day that families moved in. So far, the APS has acquired three wooden Army cots and a pail. The Homma Family was also very kind in donating two wool army blankets used at Amache. We are now looking for a pump-up fire extinguisher to complete the move-in room. Please contact the Amache Preservation Society at amache@usa.com if you have a fire extinguisher or other objects you would like to donate.

The Next Amache Projects

The 11-F Rec. building was moved in 2018 from the Town of Granada back to its original location. Restoration is in progress and we are looking for objects associated with recreation buildings to improve education and interpretation of the building.

Click here if you are interested in making a donation toward this or any of our preservation efforts.