Incarcerees at Amache engaged in activities popular across America at the time. Most were Nisei, born in America and raised as American citizens. Evidence of many of these activities are still visible at the site today.

Victory gardens were promoted in WWII as a way that people could contribute to supporting the war effort. Such functional gardens were encouraged and prevalent throughout Amache. They were prominent in common spaces and in front of barracks, as shown in this photograph of the Hirano family by their garden.

The map on the right shows locations of landscaped gardens (purple) in entry areas between facing barracks (yellow) in Block 9L. Archaeology of Amache gardens will be featured in a new book by Dr. Bonnie Clark this fall. Watch her presentation on the gardens and gardeners of Amache, prepared for TADAIMA! A Community Virtual Pilgrimage. 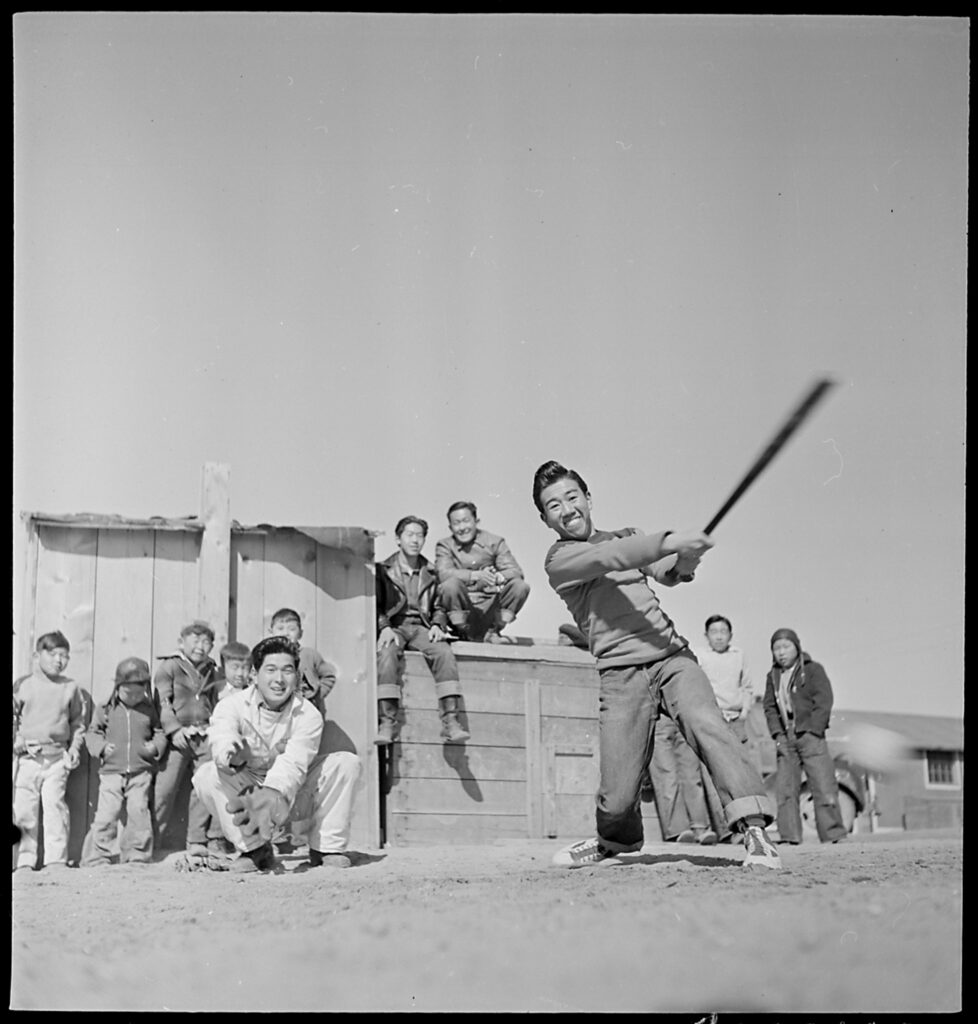 Baseball and softball were a popular pastimes at Amache, as at all the camps. Teams from Amache traveled to play against teams from other camps, and there were even matches against local teams from Southern Colorado. On September 12, 1943, a match with the Prowers County All-Stars drew a crowd of 2,000 from both inside and outside of Amache. The Amache team won 20-9. There was an official baseball field near the Amache high school, but blocks had their own teams and practice areas, as seen in this photo from the National Archives.

In 2014, the DU archaeology field school excavated a puzzling unit in Block 12H. The ground was tamped down and swept clean, save remains of a cedar plank. A wooden structure in a historic photograph indicated a potential baseball backstop. A resident of the block, Tooru Nakahira, visited during the field school open house. Unprompted, he noted that was where they used to play baseball.

Each block had a recreation hall. Many served specific purposes, such as Town Hall, Red Cross, and churches. Block 10E housed the Boy Scouts Headquarters. Amache incarceree Kaneji (Kan) Domoto, a landscape architect who studied under Frank Lloyd Wright, designed its unusual limestone and concrete porch. Incarcerees and descendants of the Block 10E Ono, Kitajima, and Omori families met at the 2018 Community Open House and took a photo there.

Children at Amache played with the same toys as children outside of the camps. Marbles were especially popular and are still scattered throughout the site. Dolls, tea sets, model cars, trucks, and planes, and other toys found at Amache mirror those available through mail order catalogs at the time. Look carefully at the ground when you visit for this evidence of life behind barbed wire. Read more in Through the Eyes of a Child by April Kamp-Whittaker.

Bill Sueoka was in elementary school when he was incarcerated at Amache. In 2012, he volunteered for the University of Denver’s Archaeology Field School. While removing the archaeology field tools in Block 11K at the end of the field season, he found a marble. One of his strongest memories was playing with marbles, and he posed for a picture in remembrance.