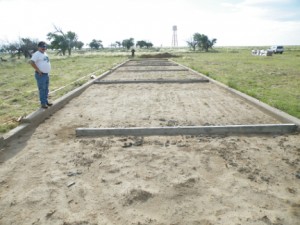 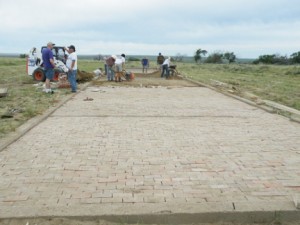 If you happen to drive into Amache now, you will be impressed with the building project that is taking place in the 12H Block, on the southern edge of the site.  A barrack is being installed there and, when it’s finally in place, it will be part of the drive-through tour that is available for visitors. This project is being conducted by John Hopper and the Amache Preservation Society.

A cast of 26 volunteers came on Saturday, June 6, 2015, to the site to lay the bricks for the floor of the barrack. This project was administered by a grant written by Colorado Preservation, Inc. and the construction was monitored by Wattle & Daub Co. Imagine laying 4,500 bricks in one day! The bricks were laid on sand first and then leveled using a huge roller. But, amazingly, these bricks were not enough to cover the surface of the floor. In fact, at least 5,000 more bricks are still needed to complete the floor.

In the meantime, the roof is being placed on the barrack and the siding for the barrack is being applied. However, these two items—the roof and siding—have been challenges. For example, because the roofing material is fragile, it has to be applied during the early morning or late evenings; the mid-day sun is too intense.  And, the siding has not been of the right type, so another product is being examined. But, once the barrack’s installation is done, John Hopper and the Amache Preservation Society hope to place a pot-belly stove in one section as well as other items to show what the interior of the barrack was like when occupied by the internees during WWII.

So far, money for this project is in place, but, with unexpected costs such as getting better siding, there probably will be cost over-runs. Hopefully, the 5,000+ additional bricks that are still needed to finish the floor will be donated.  Nearby are a guard tower and a water tower which were installed in 2014. At its completion, then, the barrack will complement the guard tower and the water tower. Without the grant written and administered by the Colorado Preservation, Inc. group and the management of the project by Wattle & Daub, this project would not have taken place. The Amache Preservation Society invites you to take a look at these newly installed structures and looks forward to your visit!